I read an article the other day which was titled “How to use the 4x4 winch properly while go offroading”.

It was quite an interesting article and had some very valid points; especially about using physics to increase the payload. There was another section about tree straps which I liked too. When I finished reading, I found myself going back to some of the earlier paragraphs which, I must be honest, were niggling at me.

The topic was about ‘concealed winches’ and despite the ‘neat’ appearance, had flaws.

So why was this niggling at me? I’ll tell you why: I love these installations!

The author’s points were credible, but unfortunately he has not seen a thorough, bespoke concealed installation!

After feeling offended with the initial statement ‘it will have a big problem’ and reading about these problems; I realised that the location of the winch wasn’t the problem, it was the installation itself!

Then I became proud that we evolved from these obstacles years ago, amazed that people still have these issues.

The first flaw mentioned in the article was that the user would not be able to see the rope on the drum. The rope/wire could be ‘bunching’ to one side! Sure that’s a problem, but only if you cannot see the drum. When we install winches behind the grill, we acknowledge that there could be an issue with visibility, so we overcome it. Not only do we make the drum visible, but we also add an LED to illuminate the drum when it is dark.

The next ‘issue’ mentioned was the reduction of the operating angle. Good! We don’t want to encourage operators to work at angles, because that’s what will cause rope ‘bunching’ to one side of the drum. It can also cause a roller fairlead to disfigure, warp and damage; roller fairleads are not designed to allow the rope/wire to winch-in/out at different angles. We prefer operators to use ‘Snatch-blocks’, pivoting D-Links, pulleys and straps to try and winch-in as straight as possible.

Winches installed at the front of a vehicle can cause extra projection and that could mean having the winch itself embedded in dirt. They are also more prone to damage and theft.

A front-end projection can also be hazardous on the highways too. They are solid and could be dangerous to pedestrians or other vehicles on the road.

We are proud of our installations. Our customers who opt for the concealed approach fully appreciate the safe operation, the nice extra touches and the honour to the original design of the vehicle. They never have any problems.

We make everything accessible on the front such as the clutch for free-spooling the rope, the emergency stop, the hook anchor and the connector for the remote.

The image shows examples of concealed installations highlighting all the points mentioned above. 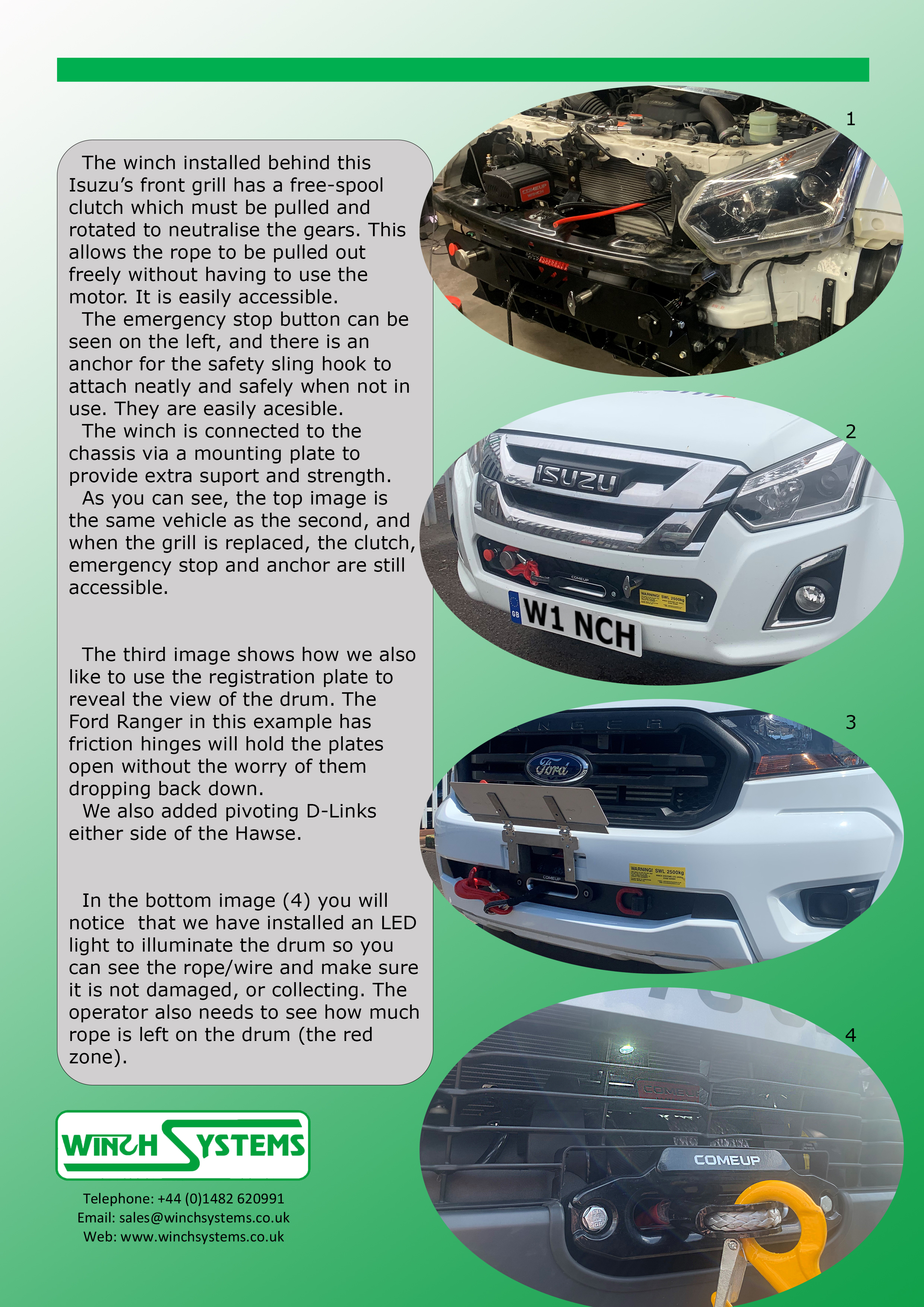